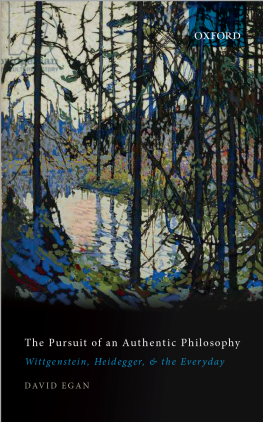 The Pursuit of an Authentic Philosophy: Wittgenstein, Heidegger, and the Everyday

Superficially, Wittgenstein and Heidegger seem worlds apart: they worked in different philosophical traditions, were mostly ignorant of one another’s work, and Wittgenstein’s terse aphorisms in plain language could not be farther stylistically from Heidegger’s difficult prose. Nevertheless, Wittgenstein’s Philosophical Investigations and Heidegger’s Being and Time share a number of striking parallels: both texts are strongly anti-dualist and anti-foundationalist, both take a holistic and pragmatic approach to thought, language, and action, and both take as the primary site of philosophical engagement the sorts of everyday activities whose significance we overlook precisely because they are so familiar. The Pursuit of an Authentic Philosophy builds on these parallels to develop two further claims that transform our understanding of these two giants of twentieth-century philosophy, and consequently inform our understanding of what philosophy might be in the twenty-first century. First, I argue that we find in Wittgenstein’s later philosophy something resembling the dynamic of authenticity and inauthenticity that marks Heidegger’s conception of human life and everyday activity. And second, I argue that both philosophers’ conceptions of authenticity apply reflexively to their own work: both are concerned not only with the question of what it means to exist authentically but also with the question of what it means to do philosophy authentically. For both authors, the problematic of authenticity is intimately linked to the question of philosophical method.

Part One examines Wittgenstein’s and Heidegger’s respective engagements with our everyday practices or forms of life, emphasizing three principal parallels across the first three chapters. First, both reject the idea that philosophy is a cognitive discipline: their method of describing familiar aspects of ordinary human existence is an alternative to a philosophical method that seeks to uncover hitherto unknown truths. Wittgenstein sharply distinguishes between grammatical and empirical investigations, and Heidegger distinguishes between ontological and ontic levels of investigation. Both use these distinctions to argue that the philosophical enterprise is radically different in kind from the sciences—and that this distinction is frequently overlooked to the serious detriment of philosophy. Second, both seek to understand any given utterance or activity within a holistic network of human practices. Wittgenstein insists that “to imagine a language means to imagine a form of life” and Heidegger examines what he calls the “worldliness” of the human world, in which objects show up as equipment whose significance is indexed to its role in human life. And third, both emphasize that these practices are essentially shared: Wittgenstein emphasizes our “agreement . . . in form of life” and Heidegger claims that human being-in-the-world is essentially a matter of being-with-one-another.

This last point, however, raises a challenge for Wittgenstein’s treatment of the everyday. Where Wittgenstein seems happy to accept agreement as a constitutive feature of human existence, Heidegger finds it troubling. In particular, he characterizes as inauthentic the mode of existence that becomes absorbed in shared norms and practices, and his analysis of phenomena such as anxiety, death, and guilt envisage an authentic mode of existence that owns up to the fundamental groundlessness and incompleteness of our everyday practices. This challenge would seem to expose a philosophy oriented to the everyday as problematically limited. Part Two articulates this challenge and offers two responses. First, I argue that we can find something similar to Heidegger’s treatment of anxiety and authenticity in Wittgenstein’s later philosophy. Far from wanting us to accept our everyday forms of life as fixed and settled, Wittgenstein’s language-games—in which he invites us to imagine strange mishaps, bizarre tribes, and alternative “natural histories”—aim precisely to unsettle our complacency regarding our everyday forms of life. Like Heidegger, Wittgenstein wants to force on us the recognition that our forms of life are ours—that they are responsive to us and we are responsible for them. And second, I argue that Heidegger’s conception of authentic existence is not an alternative to the everyday but rather a way of inhabiting the everyday more fully. For both Wittgenstein and Heidegger, an authentic existence remains ensconced in the everyday, but does so with an awareness of our role in shaping our conceptual environment. This awareness is manifest in a heightened receptivity and responsiveness, qualities that receive particularly pronounced emphasis in Wittgenstein’s appreciation of the importance of play. Wittgenstein’s investigations of language-games and scenes of teaching and learning highlight the dynamic evolution of communication and action. His account of action styles us not as agents but as players—musical or theatrical improvisation serves as a model for Witgensteinian authenticity.

Part Three brings to the forefront questions of method that have been a background theme in the previous two parts of the book. Both philosophers are concerned not only with the question of what it means to exist authentically but also with the question of what it means to do philosophy authentically. If Wittgenstein and Heidegger insist that philosophy does not inform us of new truths but rather simply reminds us of what we already know, how can their own work nevertheless be illuminating? Both Wittgenstein and Heidegger face the challenge of providing words whose efficacy does not rest on being informative, and it is on this question of method that they most diverge. I consider a number of techniques these two authors deploy—coinages, scare quotes, and the method of formal indication in Heidegger, and objects of comparison and the dialogue form in Wittgenstein—and examine the difference in these authors’ chosen terms of criticism. An important difference between Wittgenstein and Heidegger is their use of metaphors of covering and discovery. Heidegger characterizes his phenomenological method as uncovering a concealed ontological framework whereas Wittgenstein insists that “nothing is hidden” and that the only thing to be uncovered is covert nonsense. Ultimately, I argue, a greater sense of strain is apparent in Heidegger’s work, as if he wants both to tell us something and to tell us that there is no something to be told—a struggle more reminiscent of the Tractatus than of Wittgenstein’s later work. Later Wittgenstein avoids this strain by using contrasts to jog our preconceptions about the case before us without trying to tell us anything new about it. This methodological difference, I argue, manifests the more pronounced performative aspect of Wittgenstein’s investigations. Where Heidegger describes the experience of anxiety, for instance, Wittgenstein performs it in his language-games—and encourages his readers to perform it as well.

The Pursuit of an Authentic Philosophy contributes to a small but growing field of comparative work on Wittgenstein and Heidegger, using Heidegger to articulate hitherto underappreciated existential themes in Wittgenstein’s later philosophy and placing more emphasis than any of its predecessors on the crucial question of method in these philosophers’ work. It also opens a new avenue for investigating play as a central feature of Wittgenstein’s philosophy—and as a topic of independent philosophical interest. The book was published by Oxford University Press in March of 2019.